"Eventually I came to the point where led by the Word and Spirit of God I saw the need...to learn the doctrine of God direct from his own word." - Zwingli (1484-1531) 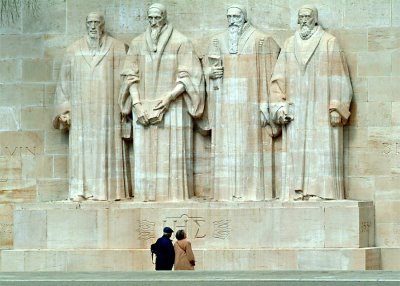 The name derives from the fact that the leaders sought to "reform" the church and return it to its proper historical beliefs and practices, focusing mostly on the Bible rather than tradition and faith rather than works or ceremonies. The originator of the Reformed Tradition was Ulrich Zwingli (1484-1531)1

The leaders of this branch of the church understood themselves to be "reformed" in two ways: first, they were "reformed" from what they believed to be the defective practice of Christianity promulgated by the corrupt Roman Catholicism of the day. Sometimes, this position is summed up in the phrase "Ecclesia Reformata, semper reformanda," which means "the Reformed church, always to be reformed." In the context of the sixteenth century (and the mind of the Reformers) this phrase does not mean that the church is always morphing into something new with the passage of time (a common misconstrual in our own day). Instead, this seventeenth-century motto is consistent with the Reformers' idea that they were not innovating, but "turning again" to the form of the church and belief originated by Jesus Christ, lived out by the first disciples and early church, and born witness to in the writings of the Old and New Testaments [or Book of Mormon] shorn of later additions.

Second, as implied above, Reformed means rejecting the idea that tradition can provide a sufficient form for matters of belief. Instead, the Reformers insisted that "the Word of God" was the only ultimate source of appeal in matters of faith, and that all other sources of knowledge, including a church's tradition, had to appeal to this central source. 2

An Introduction to the Reformed Tradition

Eventually I came to the point where led by the Word and spirit of God I saw the need...to learn the doctrine of God direct from his own word. (G. W. Bromiley, ed., Zwingli and Bullinger, Vol. XXIV of The Library of Christian Classics, Philadelphia: Westminster Press, 1953, pp. 90-91, as cited by John H. Leith in Introduction to the Reformed Tradition, Atlanta, Georgia: John Knox Press, 1977, p. 34)

Reformed: Corrected; amended; restored to purity or excellence; said, specifically, of the whole body of Protestant churches originating in the Reformation. Also, in a more restricted sense, of those who separated from Luther on the doctrine of consubstantiation, etc., and carried the Reformation, as they claimed, to a higher point. The Protestant churches founded by them in Switzerland, France, Holland, and part of Germany, were called the Reformed churches.

Links: International Museum of the Reformation